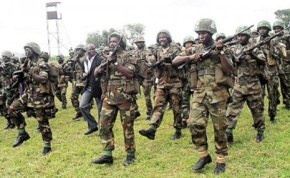 Nigerian security forces on Thursday announced a dusk to dawn curfew in northeast Adamawa State, following the declaration of State of Emergency by President Goodluck Jonathan.

Spokesperson for the 23rd Brigade, Lt. Jaafaru Nuhu said in Yola, the state capital, that the curfew from 6 p.m. local time to 6 a.m. local time has been imposed on Adamawa state.

All law abiding citizens are advised to abide by the curfew, he said.

The state is one of the three states the Nigerian president declared a state of emergency and directed the chief of defense staff, Admiral Ola Ibrahim, to deploy more troops to Borno, Adamawa and Yobe.

Business and other activities are going on normal in Yola and soldiers and policemen could be seen in strategic places observing movements.

Meanwhile, residents of northeast Adamawa have expressed shock and surprise over the declaration of the State of Emergency in their state, and urged for calm and total support for the government action to enable it succeed in achieving the desired goal for peace and security.

Ahmad Sajoh, a public commentator, urged the people to accept the development in good faith, adding that though it came as a surprise, the President might had taken the action based on the proximity of Adamawa to the affected areas in Borno state.

“Considering the serious nature of the problem in Borno, particularly Bama town which is not far from Adamawa, there is possibility that whenever the clamp down started on the insurgents in Borno they will relocate to Adamawa,” he said.