The day has come when I finally put hands on keyboard to transcribe all of my experiences 2 years ago. I did not envisage that the event of that day could send me and a few others to the “Abattoir” a detention facility managed by the special anti robbery squad.

Before leaving for the convergence of sons and daughters of Nigeria residing within the inner city of Abuja to sign a protest register against the removal of petrol subsidy, I was with Haruna Hua and Nuhu Kwajafa both trustees of the Global Initiative for peace love and Care of which I am an Advisor. I remember Haruna saying ‘‘one of us will be arrested today’’, I guess his intuitive tendencies came to bare or maybe it was our determination to get to the eagle square strapped with our 2 way radios that we use for offsite projects whenever we go to deliver relief materials to the needy.

The influence of social media and information communication technology created the necessary awareness that culminated to the events of that day. Information about the signing of a protest register against the removal of petrol subsidy by the Nigerian government went viral early that morning and the venue would be the eagle square, three arms zone, Abuja.

For anyone that knows Abuja, the three arms zone is the most secured zone in the federal capital city. Home to the seat of executive legislative and judicial powers of the republic. 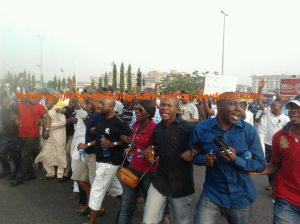 In a period where the Arab uprising in North Africa against their dictatorial leaders had revolutionize the societies in Tunisia and Egypt. The image of Tahrir square still fresh in the memories of Nigerian youths who confidently, exhibiting bravery and focusing on the one goal ‘NO TO SUBSIDY REMOVAL’ assembled but unable to gain access into the square cordoned off by the brigade of guards, department of state services and the Nigerian police force.

The car park of the square became an alternative but the security forces present at the entrance refused entry. I recollect a brave young Nigerian and the confrontation he had with one of the soldiers on guard at the gate of the eagle square.”Stop or I will shoot you” the soldier said, the bravie stepped further into the  restricted perimeter saying “shoot me with his hands opened wide” the soldier hesitated, I could tell he wasn’t afraid to die neither was the soldier ready to kill a Nigerian whom he swore to protect against external aggressors. That bravie I later knew as Japheth Omojuwa. 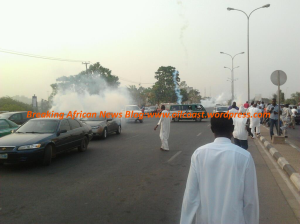 The first international news channel to setup was CCTV NEWS followed by BBC radio world service. Our local news media braved up and channels TV started capturing the events followed by AIT and ITV. I remember a Journalist from Daily Trust, we were arrested and detained together at the special anti robbery squad but he was released same day after his superiors identified him as a press man on a professional assignment.

The situation still tense around the eagle square and federal secretariat with protesters expressing themselves with songs and placards while security forces (plain clothes and uniformed) on standby to forestall any breakdown of law and order.

I can say I was the first man on the line taking pictures of the event across the road as the police took positions ready to disperse the crowd. I was hoping that the police would not fire live rounds of ammunition but to my dismay the first tear gas canister was shot far strategically to the end of the crowd base. A second tear gas was fired to the middle of the crowd base thereby trapping protesters in a frenzy that saw them scampering for fresh air. Unfortunately the third tear gas was shot directly at me aimed at my right hand which had the android device I was using to capture events. I felt my hand was no longer mine; the android device fell off effortlessly crashing on the tarred road with the back pack giving way for the battery to fall off. I quickly went for my phone and assembled it back trapped in the choking smoke of the tear gas, I took pictures of my hand. Other protesters rushed to me taking pictures of the first blood spilled. I was very infuriated and was yelling “see my hand, see my hand”.

The crowds dispersed into four groups significantly asides those that hid behind trees or got a lift or were able to take their car out of the crisis area. The second group went towards the Wuse II axis on Ahmadu Bello way and they were able to hide in the adjourning parks. The third group made right towards the three arms zone millennium park. The fourth group which I belonged to ran against traffic left towards the central mosque. Blood dripping from my right hand and my heart thumping, lungs congested, eyes blood red from tear gas trying to get away from the crisis spot I saw a pick up filled with soldiers charging towards me, I ran to the edge of the bridge, a soldier jumped off the truck and ran towards me. I looked down the bridge; it was quite some distance to jump off. The soldier got to me looked down the bridge too, realizing why I didn’t make the jump, he kicked and I quickly put my bloody hand in his face, he exercised some caution knowing I was  injured.

I was booted into the pickup truck and was handed over was handed over to the police officer at the same spot where I was shot at with a tear gas canister. I think we were about 12 in the truck while the officer in charge sent some signals over the radio. En route an unknown destination, I drew attention to myself by screaming and requesting for medical attention. 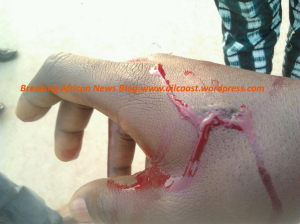 The officer in charge sent another signal over the radio indicating that he will have to stop at the hospital to take care of some casualties. We were all driven to the Wuse Police station and everyone disembarked the police truck except me and Nuhu Kwajafa who went into convulsion. We were both taken to the Wuse general hospital with two armed guards on standby. The emergency ward took us in immediately and I had my hand stitched and bandaged. The drug I was to take was not available but the other casualty had been resuscitated. Together we were put into the truck heading to an unknown destination.

After driving for about 20 minutes we got the gate of the Special Anti Robbery Squad. There we met other detainees, they were happy to see us back from the hospital and in good spirit. I must commend the Nigeria Police force for taking our health first into consideration. I must state here that most of the police officers we came across said we were fighting for a right course that most of them could not come to work in good time because the price of petrol had gone up overnight. That we over stretched our limits at the eagle square and shouldn’t have tried to come back to the three arms zone after exiting from the area.

Inside the special anti robbery squad, we were treated like VIP’s compared to armed robbery suspects. Our statements were taken and a Detention order was signed. This means that we will be there overnight and charged to court the next day. I was not privy to the charge sheet but from what I heard it was treason. Obviously the police had no evidence to prove same so we were released the following day after a night to remember.

The night didn’t pass without its usual protocol, with a detention order signed it is obvious I was going to spend the night but in what condition, eventually I had a chair to sleep with. Manner from God through a sympathetic station guard.

As darkness separates from light and the first cock crow on the hilly detention facility we were hurried into a cell alongside Boko Haram suspects. After several deliberations by a team of volunteer lawyers on our behalf, we were driven with armed security personnel siren blazing to the office of the commissioner of police, after a brief reception we were released to the press for acknowledgement.

In company of the commissioner of police we were driven to the Force Headquarters to meet with the Inspector General of Police. After a brief reception, communication with the President we were released and free to go home. We were driven back to the Special anti robbery squad to get our phones, wrist watches and other valuables in their custody.

As I look back to the events of the 2nd and 3rd January, I realized that life is a journey for the brave while the cowardly will remain onlookers. My sincere condolence to the families of all that lost someone during the struggle to salvage what was left as our common social welfare benefit.

For several weeks after, the entire country was on a standstill.