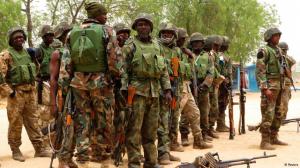 #BREAKING: The Jihadist militant group Boko haram has captured the town of Chibok where over 200 girls were abducted about seven months ago. The attack and take over took place late Thursday evening in the troubled north eastern town of Chibok. Reports said that the military retreated because of superior firepower from the militants.

Boko Haram said they want to create an islamic state in Nigeria and their leader Abubakar Shekau seemingly invincible after the Nigeria military claim he has been killed twice in two years only for him to resurface in recent videos posted online.